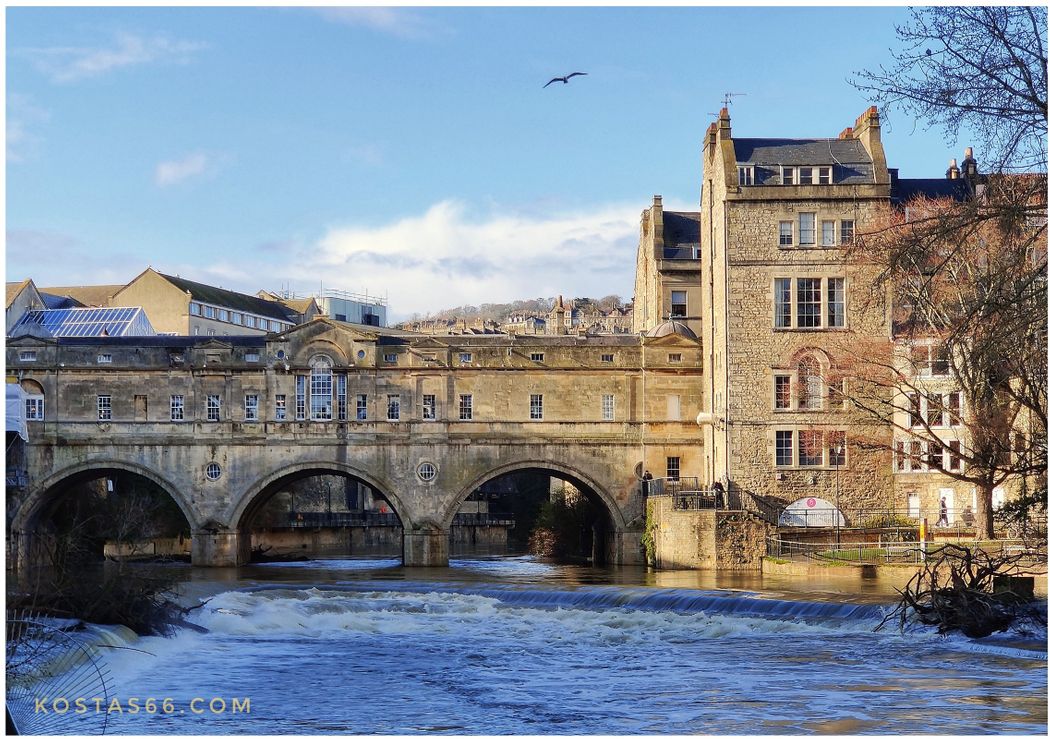 Bath is one of the most tourist cities in the United Kingdom, which due to its relatively small size can be explored in a day trip from London (157km) or Bristol (18km).

Bath took its name after its Roman-built baths, the main attraction even today. The city is located in the valley of the River Avon, in a wonderful environment of hills and green pastures. Due to tourism, the city is well-preserved and full of beautiful and upscale shops, restaurants, and tea rooms.

The river Avon crosses the heart of the city, offering fantastic views. Pulteney Bridge and its little shops with windows overlooking the river is the city's most photographed site. 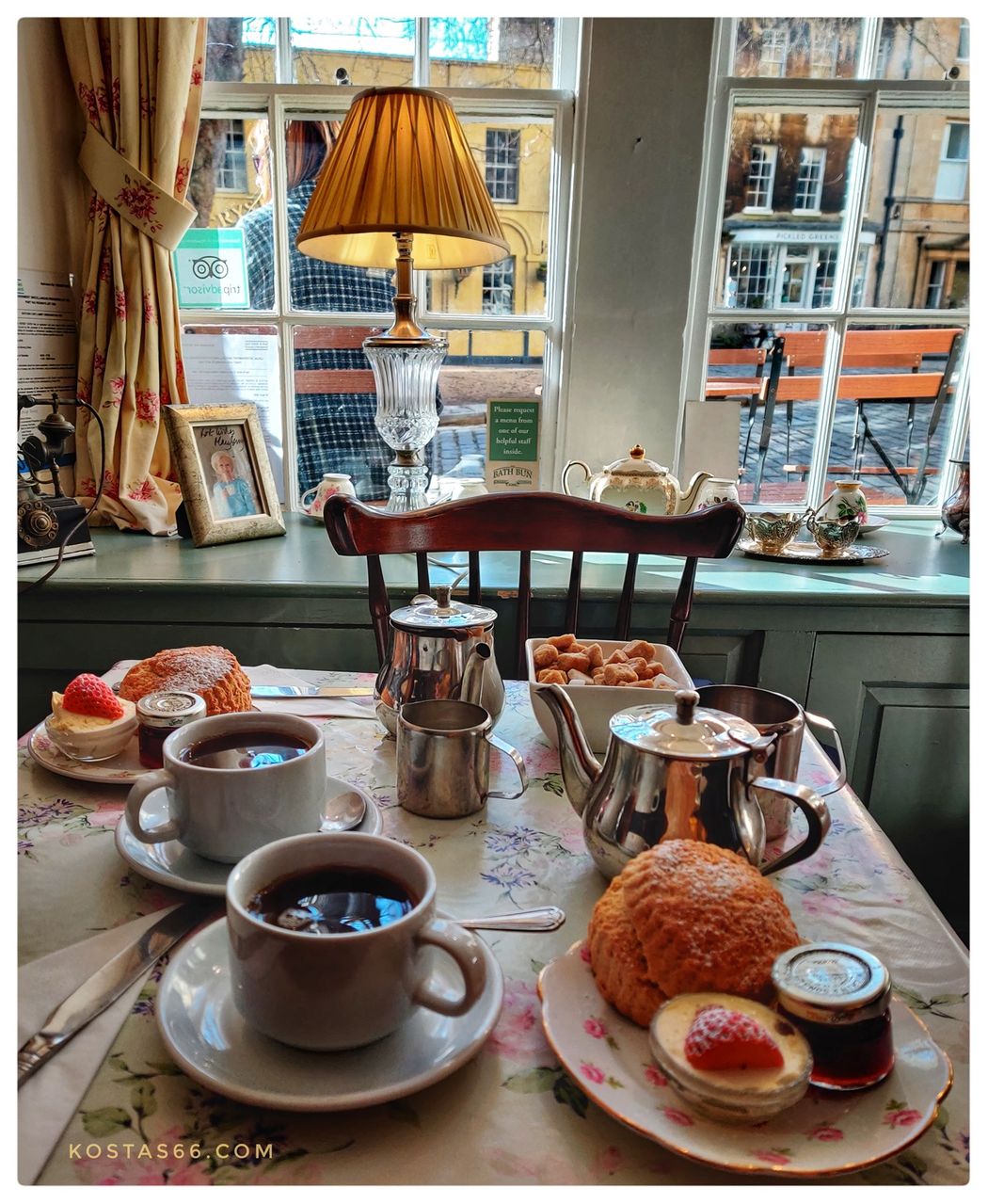 Another symbol of the city is Bath Abbey, which was founded in the 7th century and became a religious center; the building was rebuilt in the 12th and 16th centuries.

In the 17th century, claims were made for the curative properties of water from the springs, and Bath became once more popular as a spa town in the Georgian era. Georgian architecture, crafted from Bath stone, includes the Royal Crescent, Circus, Pump Room, and Assembly Rooms, where Beau Nash presided over the city's social life from 1705 until he died in 1761. In the 18th century, the city became fashionable, and the population grew. Jane Austen lived in Bath in the early 19th century.

Both the train and the bus stations are very centrally located, making it even easier to explore this fascinating city. 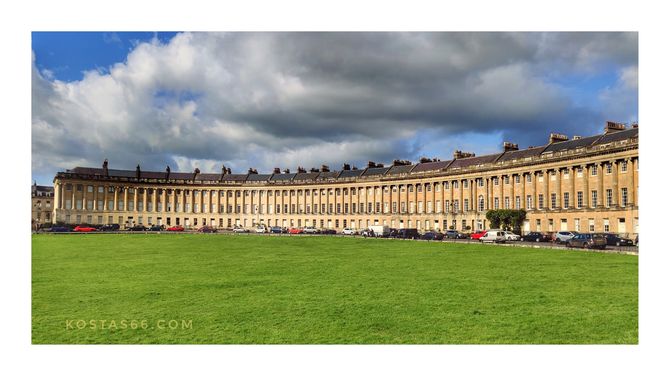 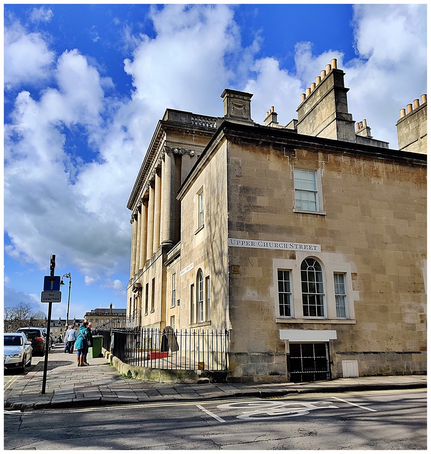 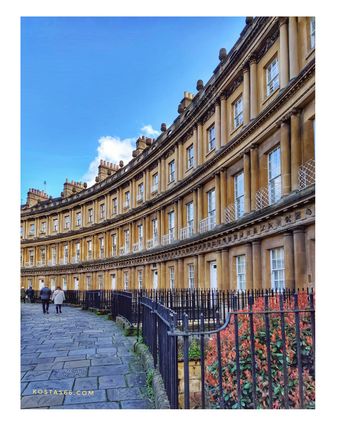 No.1 Royal Crescent seen from Upper Church Street. No.1 Royal Crescent allows the visitor to look beyond the Crescent's famous Palladian façade and see what life was like for the wealthy and their servants in eighteenth-century Bath. Built between 1767 and 1774, the Royal Crescent is considered one of the finest achievements of eighteenth-century urban architecture. No.1 was the first house to be built in the Crescent and initially provided luxury accommodation for aristocratic visitors who came to take the waters and enjoy the social season. Each room is an exquisite example of Georgian interior design with authentic furniture, paintings, textiles, and carpets.

The Royal Crescent. However, the most controversial moment in the Crescent’s history occurred during the 1970s, when the resident of No. 22, Miss Annabel Wellesley-Colley, painted her front door yellow instead of the traditional white. Miss Wellesley-Colley had to fight two enforcement orders from Bath City Council and defend herself at a public inquiry before it was finally declared that the door could remain yellow, which is just how you will see it today!

House at the corner of Trim street and Trim Bridge street.

King Edward VII Memorial (Angel of Peace). The life-size statue of the Angel of Peace is standing on a high shaft. It was located at the foot of the steps in the northwest corner of Parade Gardens, overlooking the River Avon. Newbury Abbot Trent sculpted the statue. 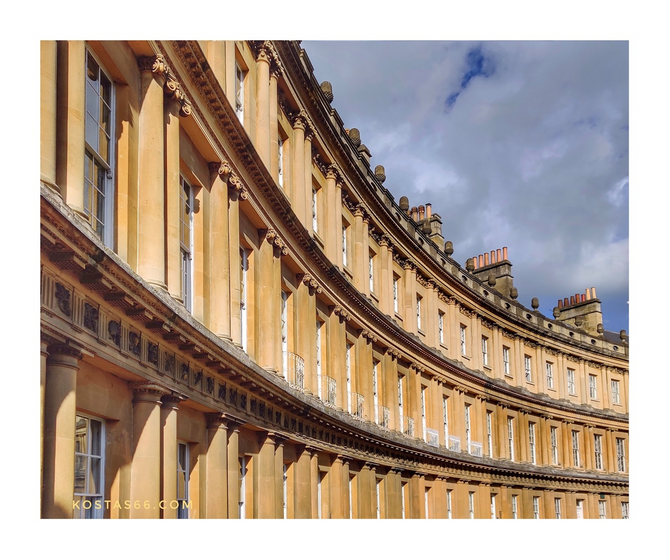 The Circus. The Circus, originally called King's Circus, was designed by John Wood, the Elder. Construction began in 1754. However, Wood died less than three months after the first stone was laid, so his son, John Wood, the Younger, completed the design in 1768. The Circus consists of three curved segments of Grade I listed townhouses, forming a circle with three entrances. When viewed from the air, the Circus, along with Queen Square and adjoining Gay Street, form a fundamental shape, a masonic symbol similar to those that adorn many of Wood's buildings. Look a little closer at the detail on the stonework, and you'll see many emblems, such as serpents, acorns, and nautical symbols. Wood admired the druids, the creators of prehistoric stone circles. Convinced that Bath had been the principal center of Druid activity in Britain, Wood studied Stonehenge and designed the Circus with the same diameter. It is said that the Circus is joined to the Royal Crescent by a ley-line and that their design represents the sun and the moon. 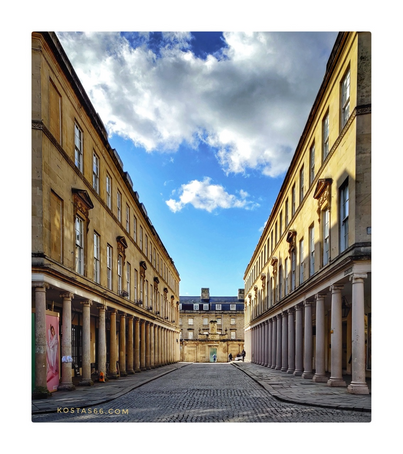 Stall street. The colonnade-entrance to the Abbey Churchyard.

Bath street. With its impressive colonnades and cobbled street, Bath Street is incredibly picturesque. Georgian architect Thomas Baldwin built it in 1791, who also built The Cross Bath, which you will find at the end of Bath Street. The Cross Bath is a historic bathing pool, using the waters which bubble up from the ground at a temperature of 46 °C. Opposite the Cross Bath, you will find the world-famous Thermae Bath Spa, Britain's s only natural thermal spa. Unadorned by shop signs and capturing eighteenth-century Bath perfectly, Bath Street lends itself well to filming and has been used as a set for many films and television productions, including the 2006 adaptation of Jane Austen's Persuasion. 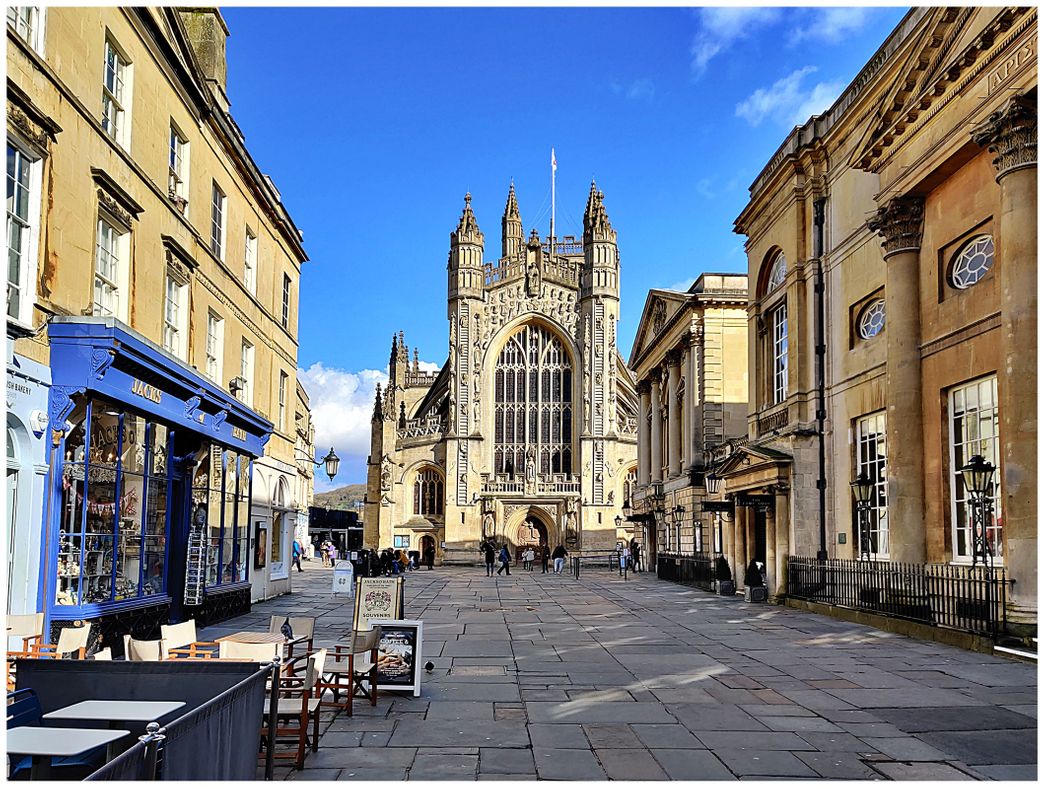 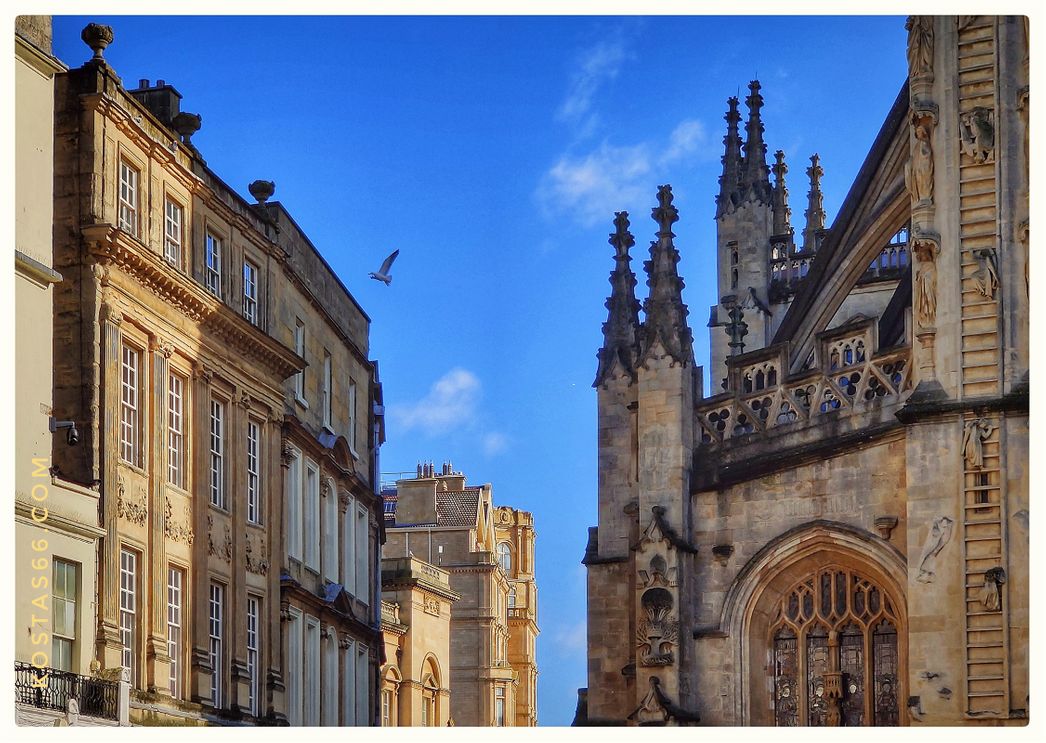 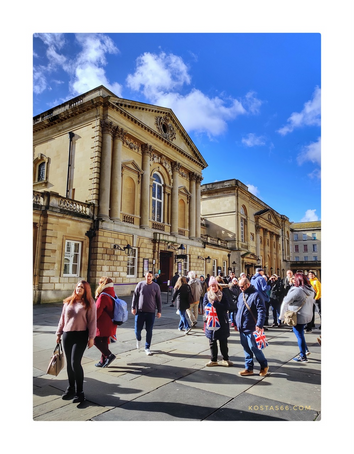 The Roman Baths building, the epicenter (and raison d'être!) of the World Heritage City of Bath. Constructed in around 70AD as a grand bathing and socializing complex, the Roman Baths is one of the best-preserved Roman remains in the world, where 1,170,000 liters of steaming spring water, reaching 46°C, still fills the bathing site every single day. 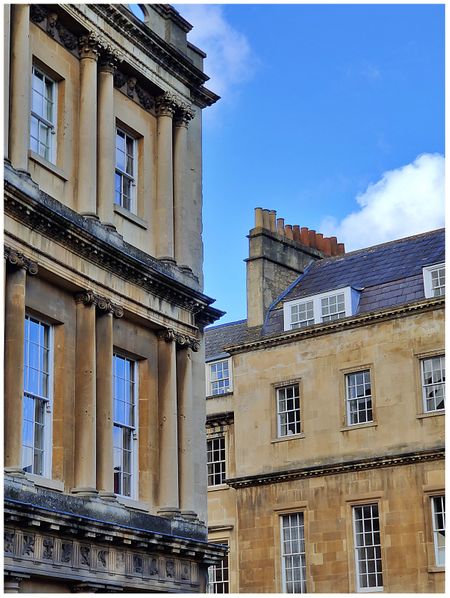 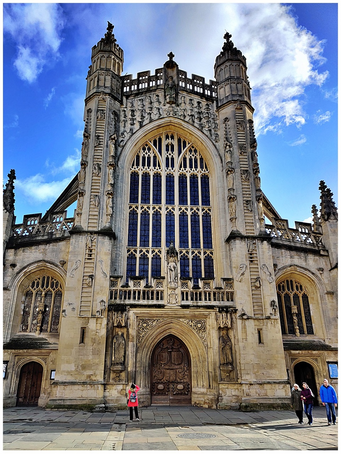 Bath Abbey. There is nowhere else quite like Bath Abbey. Magnificent stained-glass windows, columns of honey-gold stone, and some of the finest fan vaulting in the world create an extraordinary experience of light and space. But there is more to it than that. There has been a place of Christian worship on this site for over 1,200 years and the Abbey remains a living church with services taking place throughout the entire week. 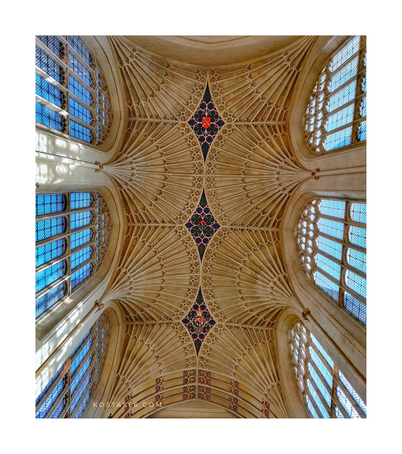 The Gothic ceiling of the Bath Abbey with its fine fan vaulting. 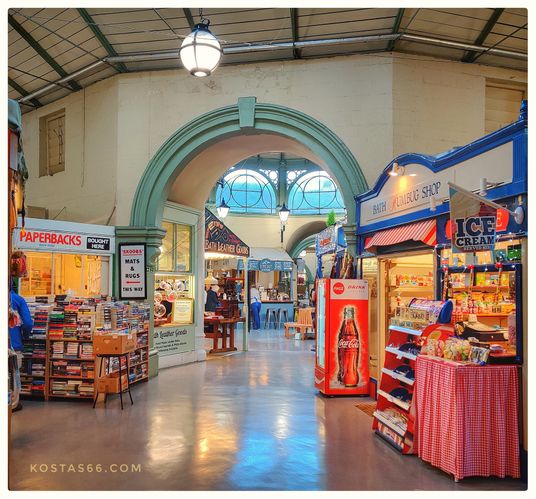 Bath Guildhall Market is the oldest shopping venue in the city and has been traded on this site for the last 800 years. Surviving from the eighteenth century is the Nail, a table on which market transactions took place. Hence the saying, to pay on the Nail. Today, a colorful group of 20 stallholders trades from this jewel of Bath.

The queen is shopping at Guildhall Market, the thriving, historic covered market of Bath, accompanied by a handsome middle-aged man from Greece. 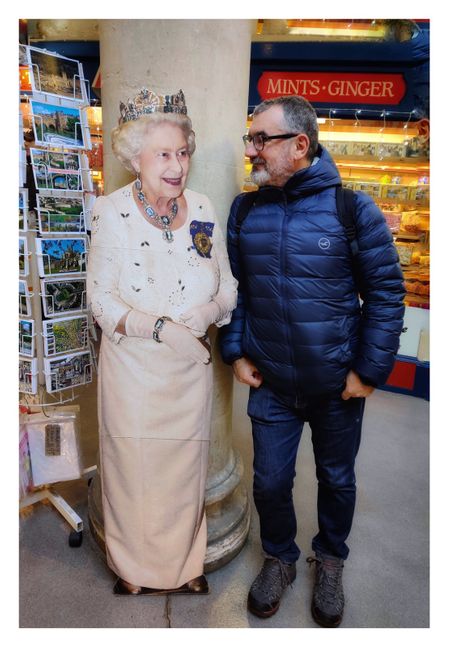 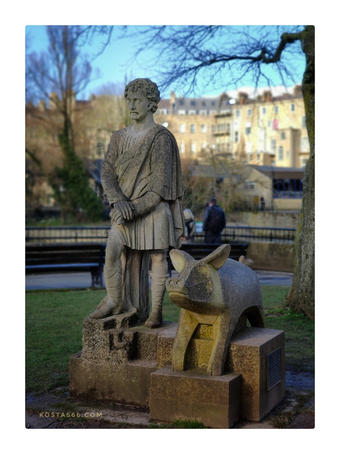 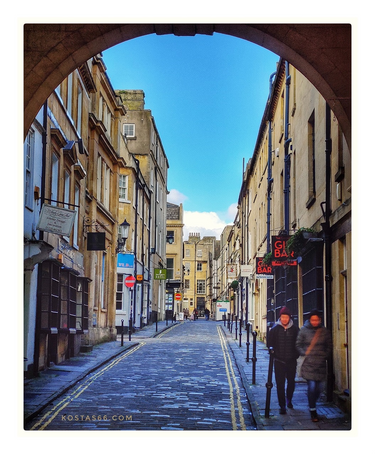 Queen street and the arcade leading to Trim street.

King Bladud is regarded as the founder of the City of Bath. This statue, sculpted in 1859 by Pieroni, stands in the Parade Gardens. The statue has had a somewhat chequered career of movement, once standing on the top of a fountain in Bath Street. It was moved from that site in 1872 to various addresses on Entry Hill and the gardens of a nursing home. 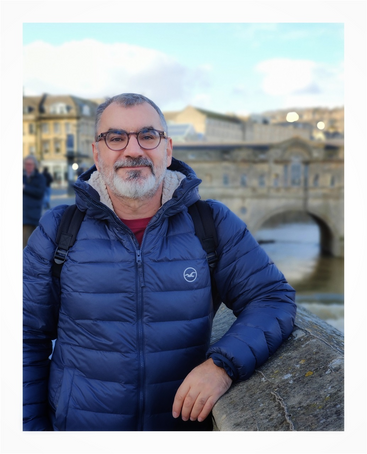 Me with Pulteney Bridge at the background. 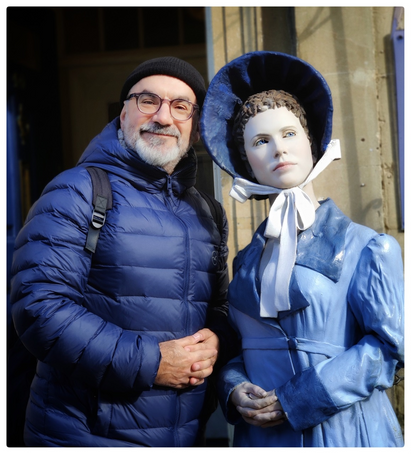 Me and Jane Austen outside her house. 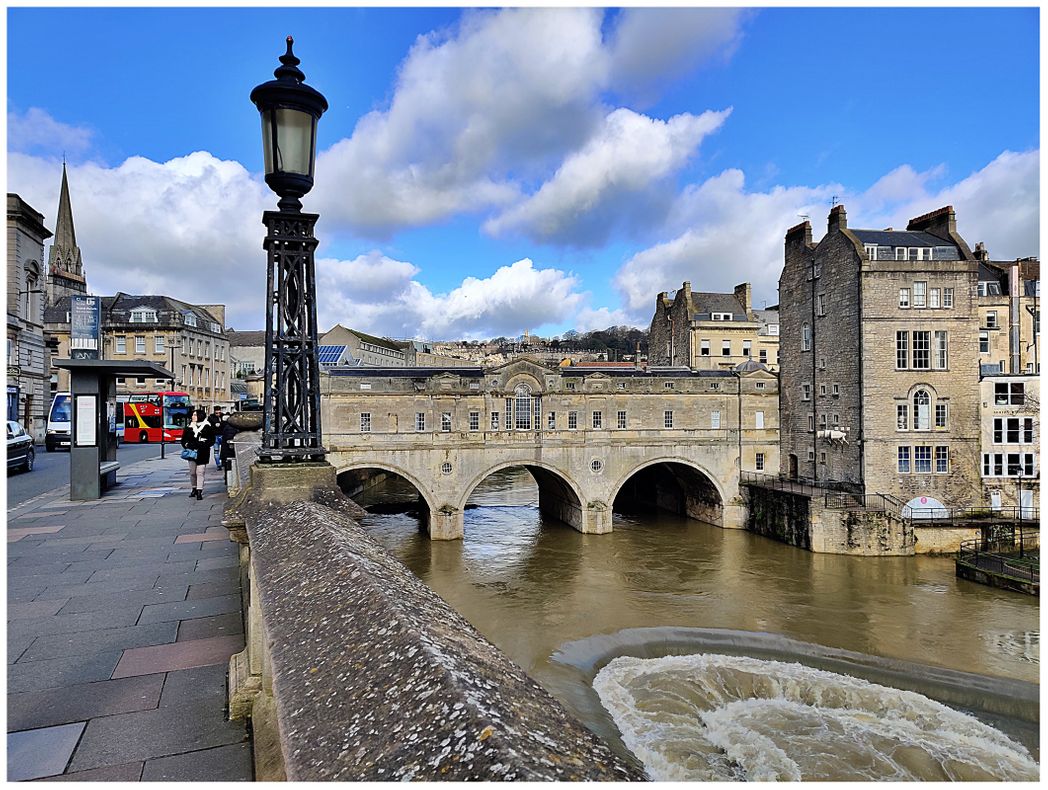 The Pulteney Bridge. One of the most photographed examples of Georgian architecture in the city and one of only four bridges in the world to have shops across its entire span on both sides, Pulteney Bridge was designed in 1769 by Robert Adam. The bridge is named after Frances Pulteney, wife of William Johnstone Pulteney. William was an important man in Georgian Bath, owning much land in the surrounding area. He had grand plans to create a 'new town' to rival John Wood's on the city's west side. His grand scheme needed a new bridge, and he didn't want just any old bridge. He wanted a spectacular bridge, one which everyone would talk about. The architecture is classical, with pediments, pilasters, and tiny leaded domes at either end. The shops are small, and the roadway is not wide, but when the bridge opened in 1770, it was a revelation. Today it is undoubtedly one of the world's most beautiful and romantic bridges, best viewed from Parade Gardens and the crescent weir. Famously, it was the scene of Javert's suicide in the 2012 film version of Les Misérables.

The shops on Pulteney Bridge. 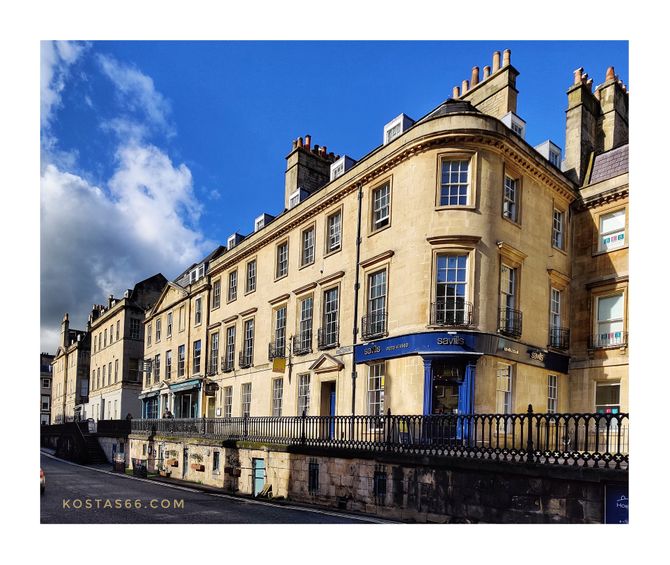 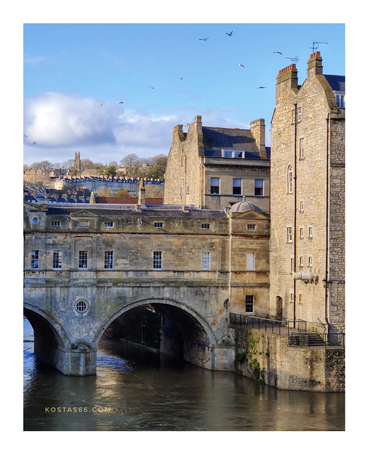 Religious worship has been carried out on "St Michael's Without" site for centuries, with a previous church being famous for its mystery plays. The church which stands on the site today is built in the Early English Gothic style, inspired by the ornamentation and appearance of the Lady Chapel at Salisbury Cathedral. 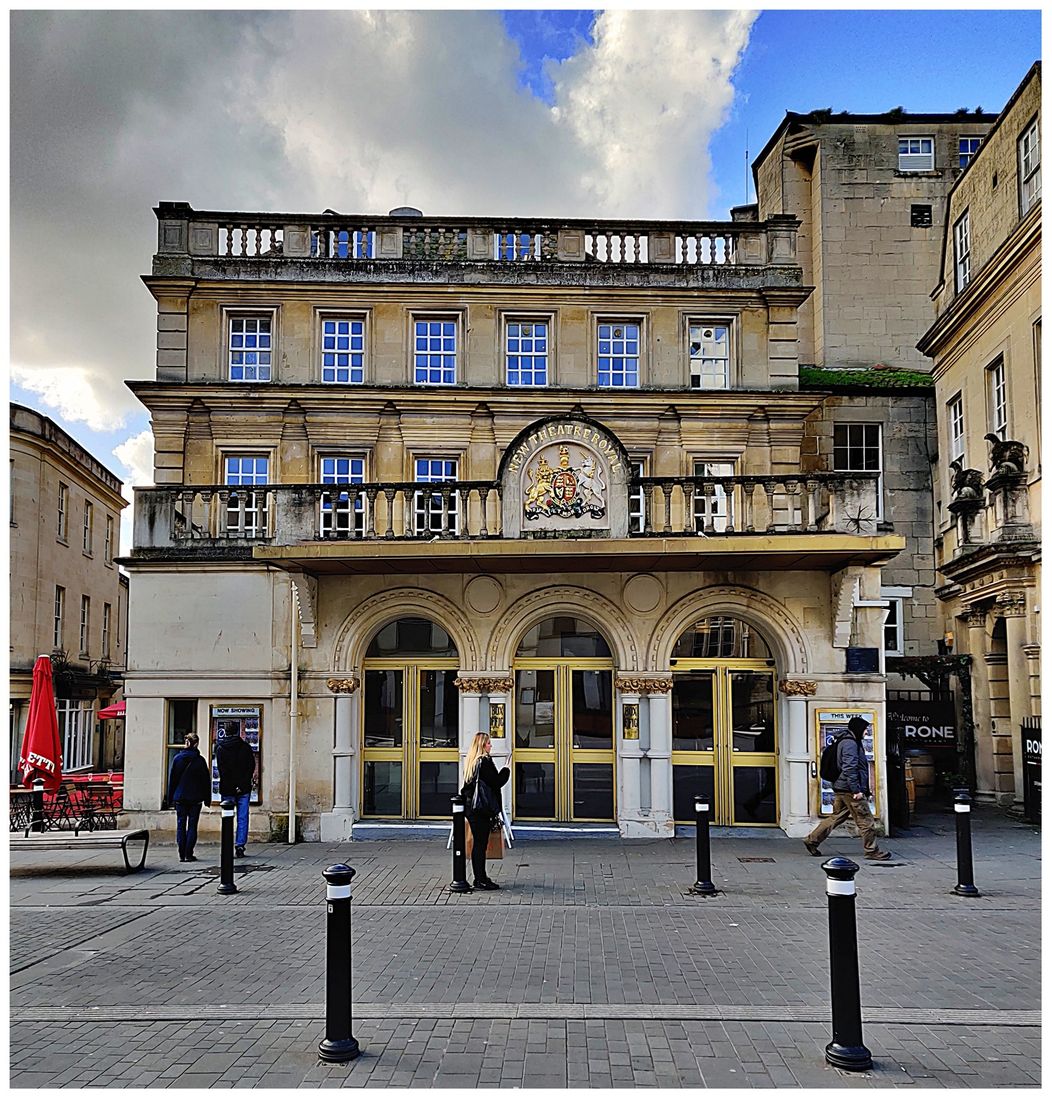 Pierrepont Street and the Abbey. 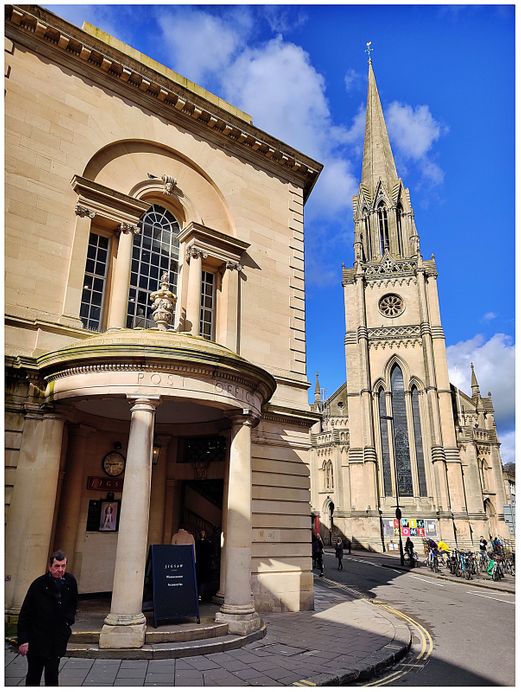 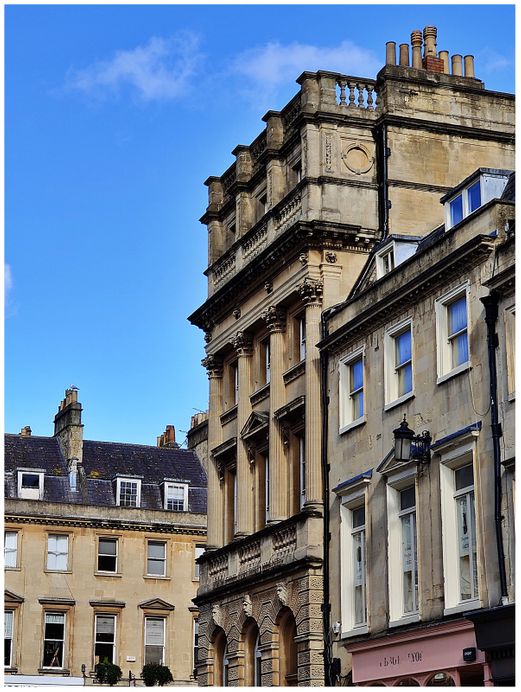 Built in 1805, the Georgian Theatre Royal was beautifully refurbished in 2010. The Main House offers a year-round program of top-quality drama, including many West End productions, opera, comedy, dance, and frequent Sunday concerts. 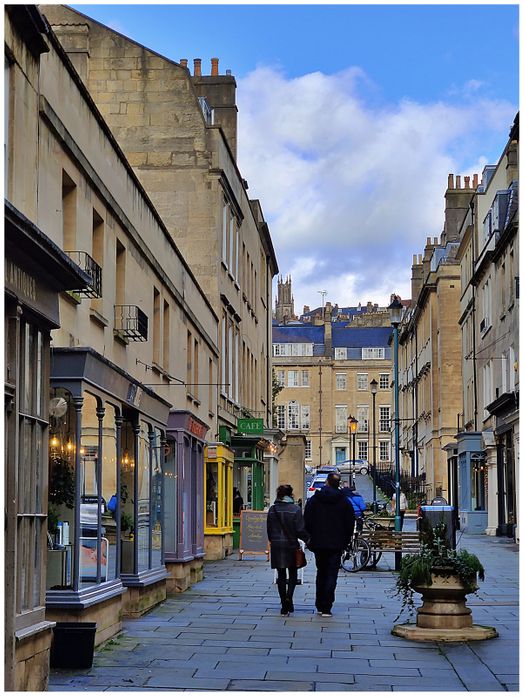