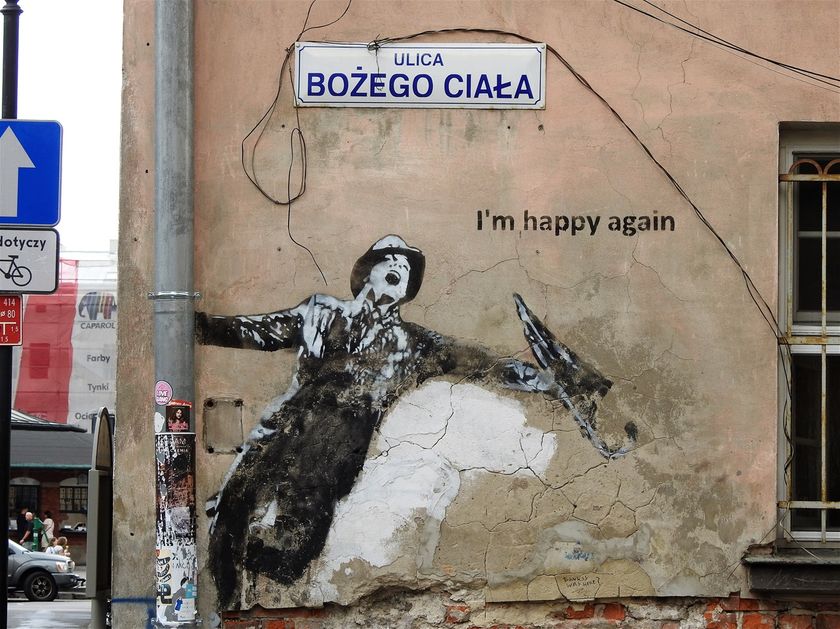 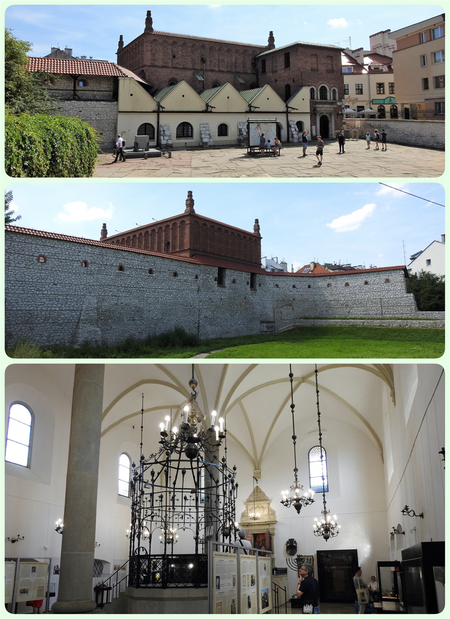 North of the Old Synagogue starts a short, but wide, street, ulica Szeroka (Szeroka street). In fact, Szeroka originally served as the centre a small 12th-century village known as Bawół, which was absorbed into Kazimierz in 1340, a few years after the latter was awarded its charter. In the late 15th century Jews banished from Kraków started settling in the area, giving it a permanent place in local Jewish history. More a square than an actual street, Szeroka conveys the sense of a medieval marketplace; indeed, it was here that Kazimierz’s first Jewish merchants settled, and the square is bookended by two of the city’s most important synagogues - the Old Synagogue and the Remuh Synagogue, whose historic cemetery covers almost all the area on the west of Szeroka. 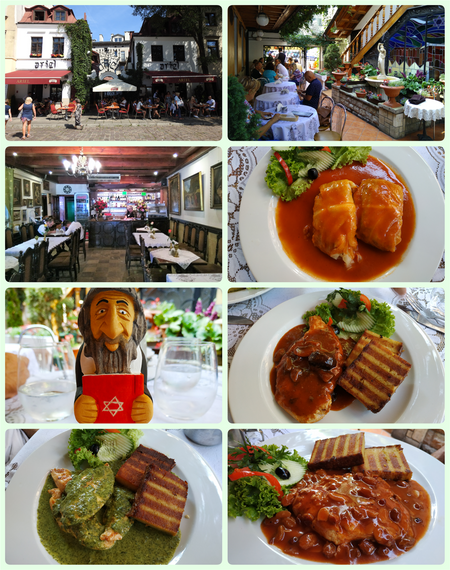 Next to Ariel stands “Synagoga Poperra”, an old synagogue turned into a beautiful bookshop.

At the north end of Szeroka the visitor will find “Dawno Temu Na Kazimierzu” ('Once Upon a Time in Kazimierz') restaurant, with its row of faux Jewish shop fronts and next door you’ll find “Hamsa” restaurant.

Today, there are 5 synagogues in the area, of which the Old Synagogue (Stara Synagoga) is the most important of them and can be visited as it currently operates as a museum. It is a Division of the Historical Museum of Krakow, with particular focus on Krakow's Jews. The exhibits are divided into themes dealing with birth, prayer rituals, diet, divorce and death. The Synagogue was built in the 15th century and rebuilt in 1570 under the watchful eye of an Italian architect Mateo Gucci. The Old synagogue is a rare, surviving example of a Polish Fortress synagogue. The synagogue was completely devastated and ransacked by the Germans during World War II. 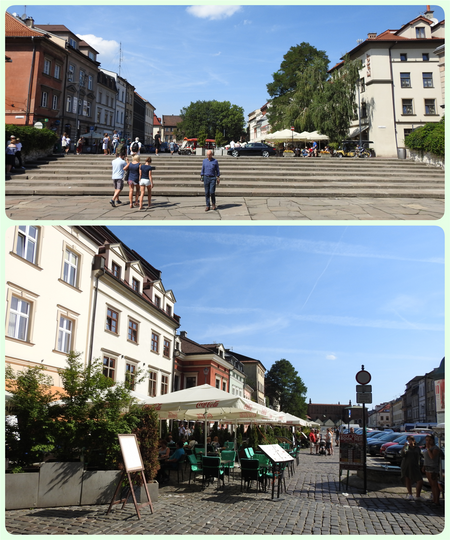 Next to the entrance of Remuh Synagogue stands the monument of Jan Karski - 'Righteous Among the Nations' for his efforts to alert the Western Allies of the Nazi genocide during WWII. Today Szeroka’s picturesque cobbled lanes are primarily lined with businesses and restaurants aimed at tourists, including “Rubinstein”  – so named because the ‘Queen of Cosmetics’ was born next door, and “Ariel”, probably the most famous Jewish restaurant in Krakow.

You’ll hear mixed reports about Ariel; while our visit was underwhelming, many extol the virtues of this veteran restaurant's varied Jewish cuisine. It is supposed that Steven Spielberg spoke highly of it when he ate here during his stay for the filming of Schindler's List… I very much doubt!  The setting is typical of the district, with antiques and heirlooms alluding to the Kazimierz of yesteryear, and a set of rooms decorated in a charmingly cluttered style.  There is also a souvenir shop on site. 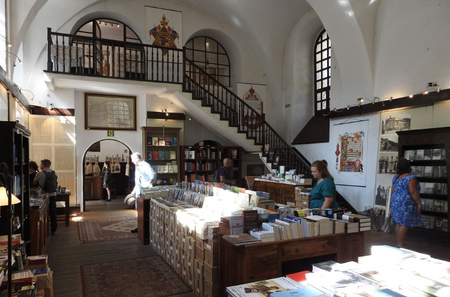 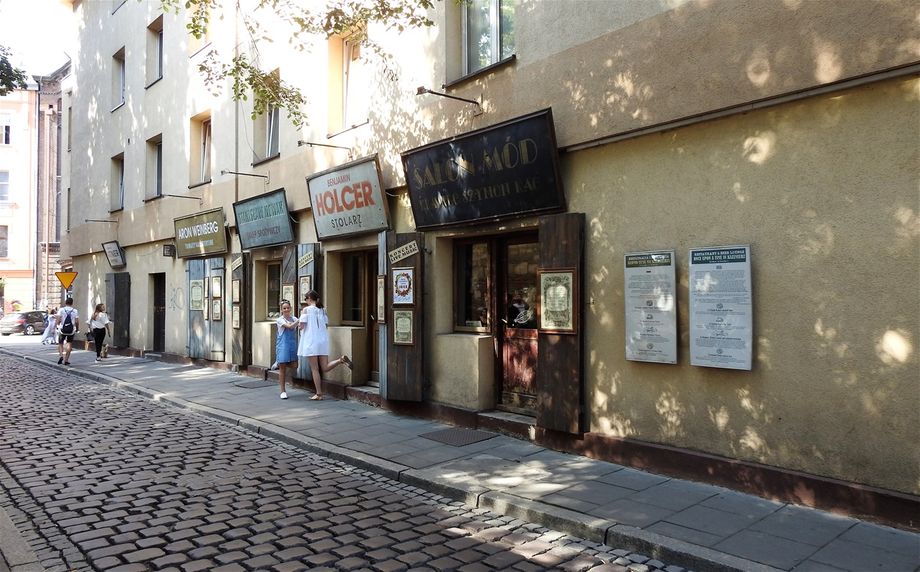 Hamsa is more than just a restaurant; it is a venue to taste modern Israeli cuisine and get into touch with eastern Mediterranean culture!  In a district whose dining establishments still treat Jewishness as a faded sepia part of the past, here's a restaurant free of nostalgic ​pre-war décor and wooden roof fiddlers, where ‘Jewish cuisine’ doesn’t mean traditional East European fare. Making a bold impression simply by being bright, modern and free of clutter, Hamsa offers a range of authentic Middle Eastern specialties in a casual environment. The mezze sets are perfect for sharing, and not only give you a chance to sample delicious starters like the humus, babaganoush, labnah and muhammarah, but are also beautifully presented in hand-painted dish ware. There's plenty of room, and in spring/summer this restaurant expands to ul. Miodowa in a beautiful garden. Here I had a not-that-special piece of kunefe pastry.

The motto of the restaurant is “Make Humus not war”.  The name of this venue was derived from a good luck amulet, which is well-known throughout the Middle East. It brings you luck and protects your household from evil curses, such as the evil eye. Hamsa is also called the Hand of Fatima, the symbol which is commonly known in both Jewish and Islamic culture. 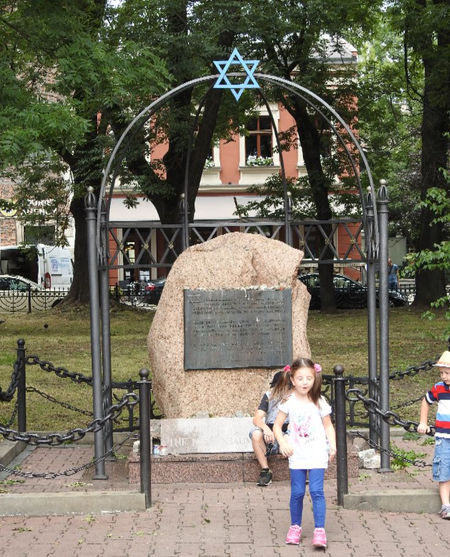 On the other side of the cemetery, starts Warszauera Street with its 17th century Kupa Synagogue, whose northern wall was flush with the medieval Kazimierz defensive walls which can still be seen from the other side on Miodowa Street. It's a short walk down Warszauera street from there to Plac Nowy (New Square), formerly known as ‘Plac Żydowski' (Jewish Square) and still today the district’s bustling epicenter, lined with bars, cafes and street food stalls.

Quench your thirst with a cold "Oranzada" at one of Plac Nowy bars. 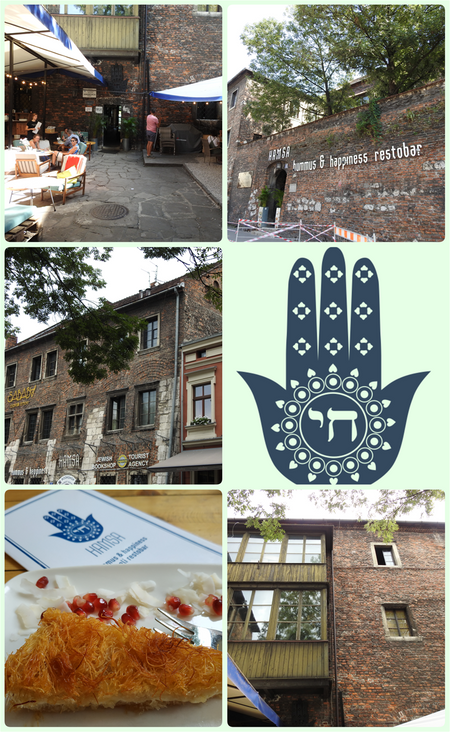 An odd legend is tied to the small patch of green at the northern end of Szeroka, which was walled off sometime during the ages for no reason apparent to early-20th century locals. According to a story perpetuated before WWII, an insubordinate wedding party took place there late one Friday, with revelers ignoring the rabbi’s requests to part as the Sabbath approached; feeling scorned, the rabbi cast a curse plunging the wedding venue underground and wiping out the newlyweds and all their guests. Ask a historian, however, and they’re more likely to tell you that the plot of land was probably a small cemetery used to bury those who perished from the plague. Today it has been fashioned into a memorial and “Place of meditation upon the martyrdom of 65,000 Polish citizens of Jewish nationality from Cracow” as a large stone monument explains. 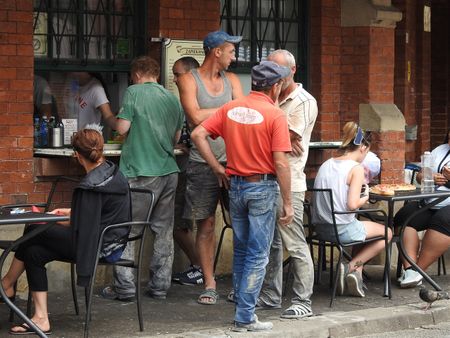 The square has a very relaxed atmosphere and people look different that those frequenting other Krakow neighborhoods: more relaxed I would say. Plac Nowy has established itself as the spiritual centre of Kracowian subculture. Lacking the splendour of the Old Town, Plac Nowy is actually something of an eyesore – a concrete square lined with cars and filled with food hatches, metal market stalls and rat-like pigeons. If you want something completely different from the Old Town, however, here it is. Incorporated into the Jewish quarter in the late 17th century, Plac Nowy didn't really begin assuming its shape until the early 19th century, with its central landmark, the Okrąglak (rotunda), added as late as 1900.