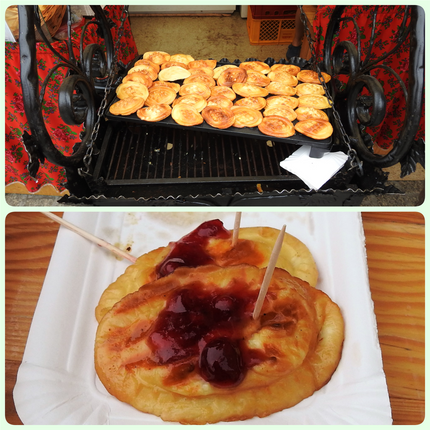 The recent years the cheese has enjoyed an increase in popularity. Instead of parzenice (characteristic decorative motif embroidered on traditional clothing) or wooden carves, food-loving tourists now bring home oscypek:  I did the same exactly. I tried it in my salad back home and also toasted it between two slices of bread. While in Krakow, you can find it anywhere in shops and in markets, but also in the streets sold off small vending carts.  In its most “touristic” version, the cheese is sliced, heated and served with some lingonberry or cranberry preserve: very tasty but very chewy! 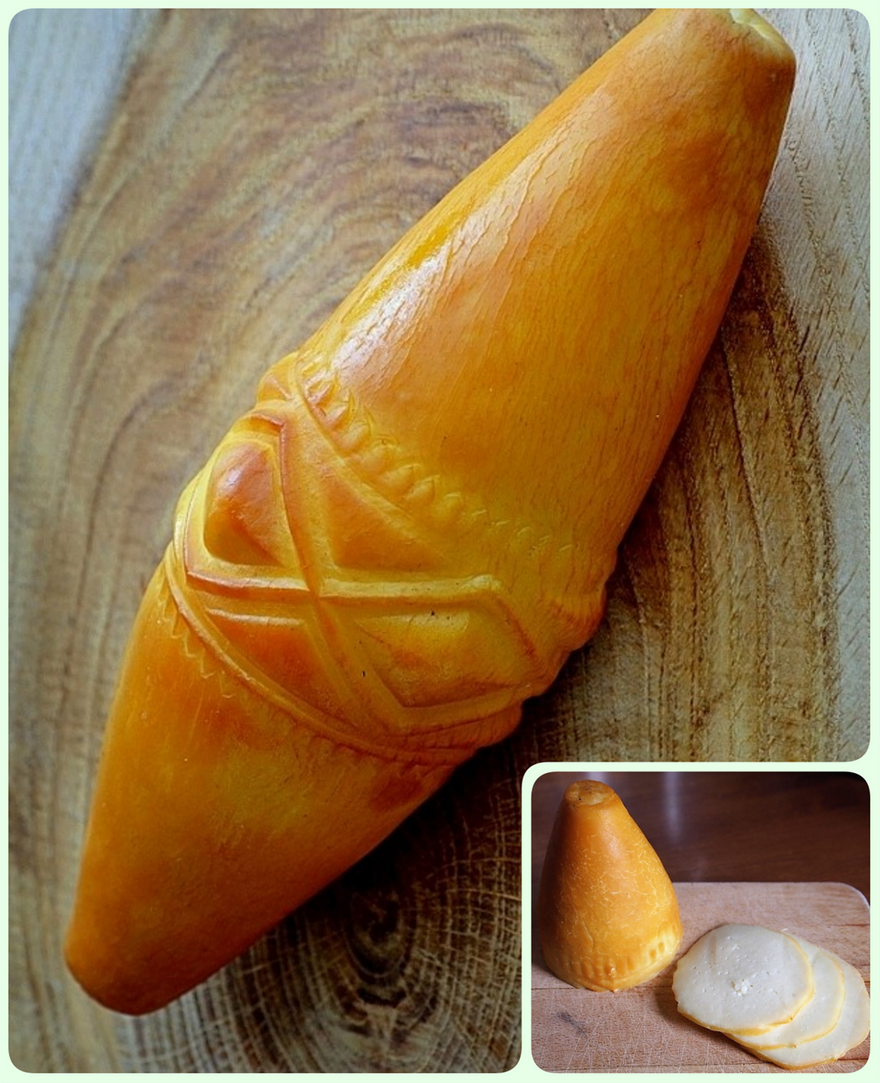 St. Mary's Trumpet Call (Hejnał mariacki) is a traditional, five-note Polish anthem closely bound to the history and traditions of Kraków. It is played every hour on the hour, four times in succession in each of the four cardinal directions, by a trumpeter on the highest tower of the city's Saint Mary's Church. The noon performance is broadcast via radio to all of Poland and the world. The real origin and author of the hejnał are unknown. The earliest written mention of it appears in civic pay records of 1392. The word hejnał comes from hajnal, the Hungarian word for "dawn". The weird characteristic of the hejnał performances is that they end abruptly before completion. 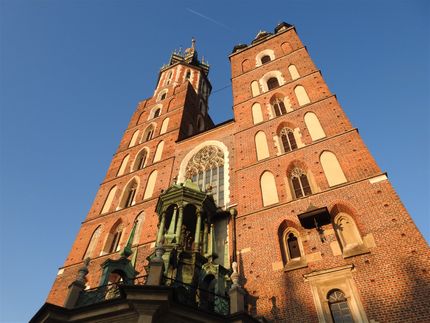 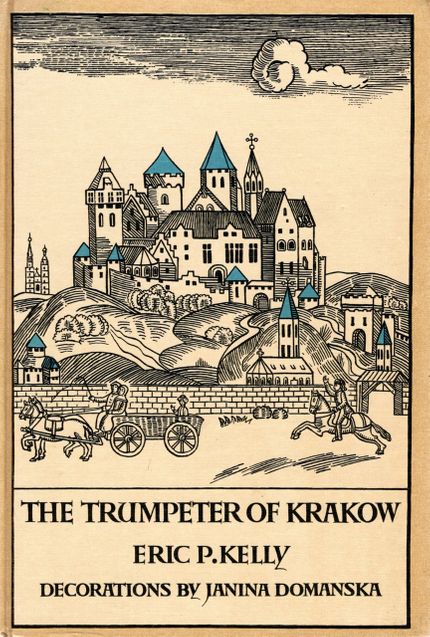 The cover of the 1929 book "The Trumpeter of Krakow" by Eric P. Kelly.

According to a popular 20th-century legend, during a Mongol invasion of Poland , Mongol troops led by General Subutai approached Kraków. A sentry on a tower of St Mary's Church sounded the alarm by playing the Hejnał, and the city gates were closed before the Tatars could ambush the city. The trumpeter, however, was shot in the throat and did not complete the anthem, and this is the legendary reason as to why performances end abruptly before completion.

The earliest written version of this legend is from the prologue to American Eric P. Kelly’s 1928 children’s book The Trumpeter of Krakow.  Part of the current legend may come from a more recent historic incident when a trumpeter died of natural causes while on duty at midnight on 7 July 1901. A 1926 tourist guide vaguely states that the death of a trumpeter was the reason for the premature ending of the anthem, but does not mention the siege or arrows.

Around the Main Market Square there are many cafes, pubs and clubs, which are located in medieval basements and cellars with vaulted ceilings and which during summer months they spread hundreds of tables on the square itself.  Numerous events, concerts and exhibitions are also organized there.

Sit at one of the cafes or restaurants and watch people pass by.

There are so many attractions around the Main Market Square, which makes you feel dizzy.  There is one attraction, though, that has not to do with architecture or history but has to do with more humble feelings, that is chocolate craving!  Do not miss the "Pijalnie Czekolady E.Wedel" located at northern part of the square (46, Rynek Główny St).  This is one of the lounges the Wedel Chocolate brand has all around Poland and the only one in Krakow. 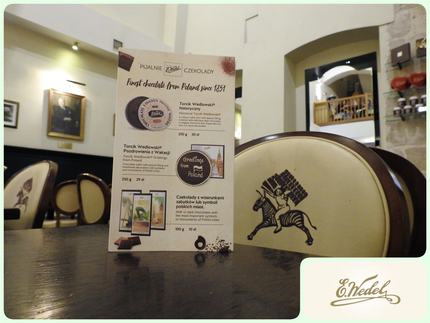 Inside the Wedel Chocolate lounge. The zebra logo on the chair backs and the original logo (bottom right). 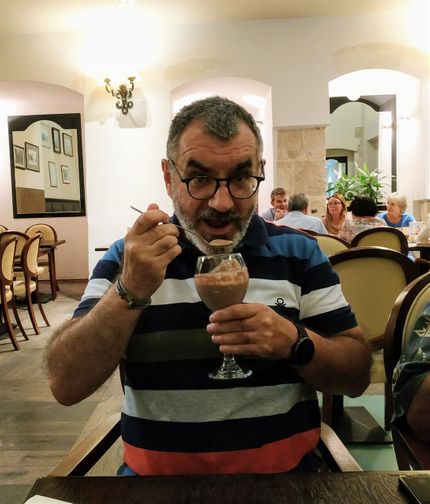 This lounge is certainly the shrine of chocolate lovers in Krakow and you have to visit it several times to be able to taste an adequate amount of the hundreds of dessert delights they offer.  The shop is located on the ground floor of a beautiful building and has a large room inside and several tables on the square itself to serve as many customers with a sweet tooth as possible. There is nothing better than enjoying your ice-cream or a chocolate dessert while watching the crowds come and go in the square, so it is worth waiting some minutes to get a table on the square when the place is crowded.  Nevertheless, do not worry if you do not get a table outside, the big room inside is equally attractive.  Besides it is the desserts that matter!

Wedel is one of the most recognizable polish brand names.  Founded in 1851 by Karl Ernst Wedel (1813-1902), the company and its products became known in most of Central and Eastern Europe. The logo of the company is based on Wedel's signature. His son Emil Albert Fryderyk Wedel (1841-1919) apprenticed in candy and chocolate factories in Western Europe before inheriting and expanding his father's business. His descendant Jan Wedel (d. 1960), the last member of the Wedel family to own the company, was considered "the Willy Wonka" of pre-war Poland. In 1934, during the time of the Great Depression, Jan Wedel opened a second factory in Praga, one of the most modern in the Second Polish Republic. The company was also known for its very generous social welfare policies. As one of the first in Europe, it had its own creche, kindergarten, hospital and cafeteria, and rewarded its best employees with no-interest housing loans; its model was highly acclaimed by the Polish Socialist Party. Hence prior to World War II, Wedel became a successful private company, with shops in London and Paris. 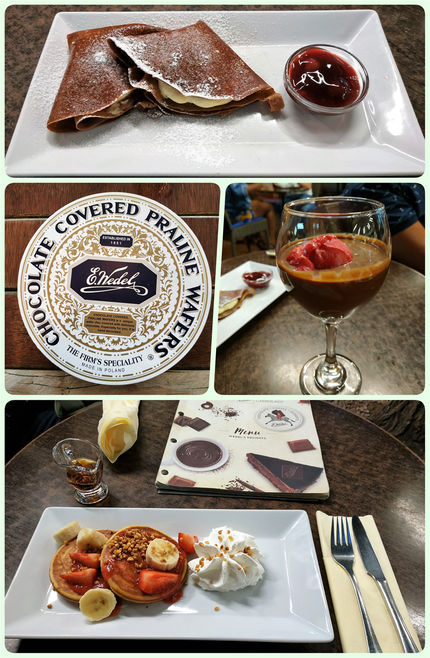 My favorite: chocolate crepes filled with sweet ricotta cheese and wine-cherry topping (top). One of the most famous products is the "Torcik Wedlowski" - a large, circular, chocolate covered wafer with hand-made decorations (a perfect gift to bring back home) (middle left). Chocolate cream with raspberry ice-cream (middle right). Pancakes (the polish size) with maple syrup and fresh strawberries (bottom). 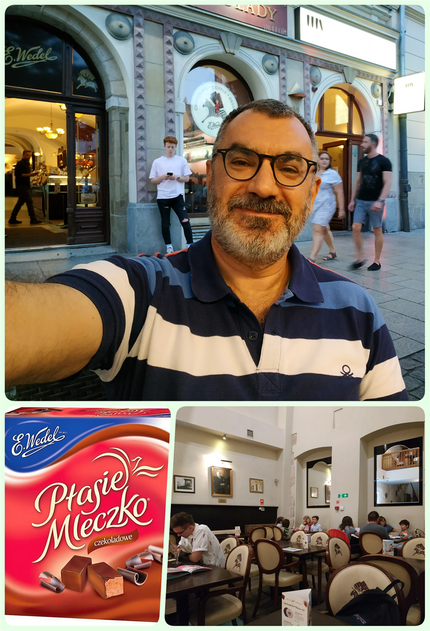 The company managed to continue production during the first few years of the World War II. It also started producing basic foodstuffs such as bread for starving Warsaw. Despite the family's German ancestry Wedel refused to collaborate with the Germans, and did not sign the Volksliste; increasingly this led to him and his employees being persecuted by the Nazis. The war devastated Poland and the company; the buildings at Warsaw were destroyed during the Warsaw Uprising. After the war, Wedel rebuilt the factory, only to have the communist government nationalize the company. The Wedel plant itself was renamed '22 Lipca' (22 July) after the Communist 'Independence Day', although even the communists chose to retain the Wedel brand name, with products bearing both the new and old logos (particularly as after 10 years of not using the logo, all attempts at exporting proved futile).